Are You Making These Common Mistakes With Supply & Demand? 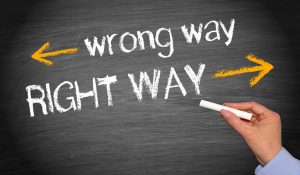 Usually it’s because they’ve combined methods from various sources and ended up with a confused mess of charts.

In this article we’re going to explore those basic mistakes and how to correct them.

One of the most common mistakes I see is drawing a zone where there has been no fast move.

A Supply or Demand zone has to start with a fast move. A fast move indicates there was an imbalance in the market and an urgency for the market to go up or down.

In this 1 hour chart of the dollar index (replicated from a student), the zones have been drawn incorrectly. Can you spot what’s wrong?

Even though the lower zone did cause a reaction when the market came back, the initial move away from the zone was not fast.

The upper zone is a bit better, there was an initial pump, but then the market settled into a channeled move. There are some other reasons why we wouldn’t trade this zone too, but we’ll look at those later.

For now, just compare the zones I have drawn on the chart below in yellow vs. the student’s zones in orange. The market moved away from the yellow zones very quickly – this is exactly what we want to see.

You’ll notice that I’ve also added a failed zone. Another common “new trader” fallacy is wanting to be right all the time!

If you want to be a successful trader, I’m sorry to say that drawing rectangles indiscriminately on a 5 or 15 minute chart just isn’t going to cut it! That’s another common mistake I see all the time.

You need an understanding of when those rectangles become important, when they should be avoided and how to place them into the overall context of the market.

That’s a whole new subject about bias, flow and market structure (which I go into in my course), but for now I’m going to give you a few pointers.

Let’s take a look at that chart again, there’s a few things to notice:

With all this in mind, you get a feel for the market flow being short and definitely do not want to trade against it.

Now let’s look at a higher timeframe chart – the 4 hour.

We can see the reason the market spiked and rejected where it did. There is a 4 hour zone just above where the market spiked which is in confluence with a Price Pivot Zone. This adds to our short bias on the 1 hour timeframe.

The key takeaway is always to look at the higher timeframes – they will often give a reason why something happened on the lower timeframes.

Finally, something that can easily be missed on a chart.

The market will often “wick back” immediately to test a zone. When that occurs, drill down to a lower timeframe. You may find the zone has already been tested or the move away from the zone was too slow and hence not as strong as you first thought.

Head on over to my course page here and learn the full strategy, including advanced supply & demand concepts, market structure, how the smart money manipulates the market and how to apply these concepts to Forex, Stock Indices, Commodities and Crypto Currencies.

Why Price Pivot Zones Are Essential To Your Trading
September 24, 2018

Go to Top
We use cookies on our website to give you the most relevant experience by remembering your preferences and repeat visits. By continuing to browse or clicking “Accept”, you consent to the use of ALL the cookies.
Cookie settingsACCEPT
Manage consent

This website uses cookies to improve your experience while you navigate through the website. Out of these, the cookies that are categorized as necessary are stored on your browser as they are essential for the working of basic functionalities of the website, including being able to purchase and access courses. We also use third-party cookies that help us analyze and understand how you use this website. These cookies will be stored in your browser only with your consent. You also have the option to opt-out of these cookies. But opting out of some of these cookies will affect your browsing experience and ability to view course content.
Necessary Always Enabled
Necessary cookies are absolutely essential for the website to function properly. These cookies ensure basic functionalities and security features of the website, anonymously.
Functional
Functional cookies help to perform certain functionalities like sharing the content of the website on social media platforms, collect feedbacks, and other third-party features.
Performance
Performance cookies are used to understand and analyze the key performance indexes of the website which helps in delivering a better user experience for the visitors.
Analytics
Analytical cookies are used to understand how visitors interact with the website. These cookies help provide information on metrics the number of visitors, bounce rate, traffic source, etc.
Advertisement
Advertisement cookies are used to provide visitors with relevant ads and marketing campaigns. These cookies track visitors across websites and collect information to provide customized ads.
Others
Other uncategorized cookies are those that are being analyzed and have not been classified into a category as yet.
SAVE & ACCEPT
Login
Lost Your Password?